What is Bulgur Wheat

From Wikipedia, the free encyclopedia
Not to be confused with buckwheat. 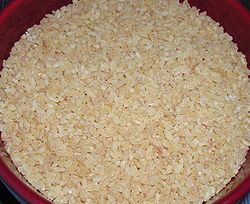 Bulgur (from Turkish: bulgur;[1] also burghul, from Arabic: برغل‎‎[2] groats) is a cereal food made from the groats of several different wheat species, most often from durum wheat. Bulgur is a kind of dried cracked wheat.[3] It is most common in European, Middle Eastern, and Indian cuisine.

Parboiling of bulgur in central Turkey

Bulgur for Armenian consumption is usually sold parboiled and dried, with only a very small amount of the bran partially removed. Bulgur is recognized as a whole grain by the U.S.D.A. and the Whole Grains Council. Bulgur is sometimes confused with cracked wheat, which is crushed wheat grain that has not been parboiled. Whole-grain, high-fiber bulgur and cracked wheat can be found in natural food stores, Middle Eastern specialty grocers, and some traditional grocery stores. Bulgur is a common ingredient in Armenian, Iraqi, Assyrian, Kurdish, Syrian, Israeli, Jordanian, Palestinian, Lebanese, Turkish, Middle Eastern, and Mediterranean dishes. It has a light, nutty flavor. In Turkey, a distinction is made between fine-ground bulgur, called köftelik bulgur, and a coarser grind, called pilavlık bulgur. In the United States, bulgur is produced from white wheat in four distinct grinds or sizes (#1 Fine, #2 Medium, #3 Coarse and #4 Extra Coarse). The highest quality bulgur has particle sizes that are uniform thus allowing a more consistent cooking time and result.

It is also known as “Dalia” in North India. Dalia is popular all over the wheat-consuming regions of North India. It can be consumed as sweet dalia or regular dalia.[4]

Bulgur can be used in pilafs, soups, bakery goods, or as stuffing. In breads, it adds a whole grain component. It is a main ingredient in tabbouleh salad and kibbeh. Its high nutritional value makes it a good substitute for rice or couscous. In Indian cuisine, bulgur or daliya is used as a cereal with milk and sugar. In the United States is often used as a side dish, much like pasta or rice. In meals, bulgur is often mistaken for rice because it can be prepared in a similar manner, although it has a texture more like couscous than rice. A popular South American carnival food, bulgur is often prepared with flower pollen and tapioca syrup and fried in patties[citation needed].

In Turkey, bulgur is prepared (using pilavlık bulgur) as pilaf in chicken stock, with or without sauteed noodles, or cooked with tomatoes, onions and red pepper. The fine grind (köftelik bulgur) is used for making kısır, a bulgur salad similar to tabbouleh, prepared with tomato paste, fresh tomatoes, cucumbers, parsley, olive oil, and other salad ingredients to personal taste. Pomegranate molasses (nar ekşisi in Turkish), which is more sour than sweet, is commonly used in favor of lemon juice to add tartness. A variety of mezes and main dishes are prepared with köftelik bulgur, such as çiğ köfte, içli köfte, and ezogelin soup. It also forms the base of a soup, tarhana, which is made with yogurt to which hellim/halloumi has been added. In Cyprus, it is used to make koupes (also known as bulgur köftesi), a variety of kibbeh.

The food was popular in all regions of the Ottoman Empire and variants of the name are in all the corresponding languages (including bollgur in Albanian, булгур bulgur in Bulgarian, πλιγούρι pligoúri or πουργούρι pourgoúri in Greek, gurgur in Aramaic and բլղուր blghowr in Armenian).

The Saudi Arabian version of bulgur, popular in Nejd and Al-Hasa, is known as jarish.[5] The Arabic word jarish simply means cracked or coarsely ground. The Saudi Arabian jarish dish is an ancient one.

Compared to unenriched white rice, bulgur has more fiber and protein, a lower glycemic index, and higher levels of most vitamins and minerals.

There are no reviews yet.